ANNUAL DIRECTOR'S REPORT TO THE COMMUNITY 2019-20

Click the links above to jump to a section. 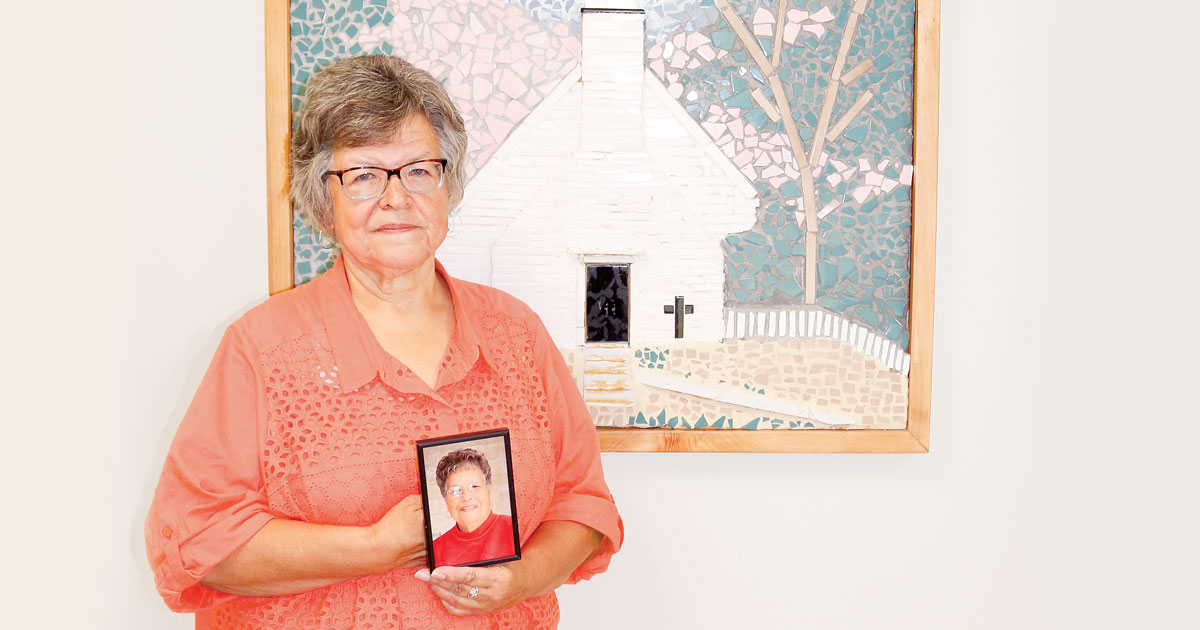 Above: Claudine VanEvery-Albert holds a photo of her mother Mary (known as Penny).

"Some families didn’t talk about what had happened at the residential schools because the trauma was too great,” says Claudine VanEvery-Albert, who is Mohawk and a member of the Turtle clan, as well as a Grand Erie Trustee representing the interests of Six Nations students. “But my family talked about it. We talked about it a lot.”

The family discussions meant she asked questions and gained insight into this dark chapter of the country’s history, which affected several of her family members firsthand, including her grandfather, her mother and aunts. It left a troubling legacy for generations as the system forced assimilation, with a complete disdain for Indigenous cultures, customs, and languages. These family discussions also illuminated the survival skills and acts of resistance and courage used by her family members to retain aspects of their Haudenosaunee culture – acts which decades later are a source of strength and identity.

“When my grandfather was sent to the "Mushhole" as we call it – the Mohawk Institute Indian Residential School in Brantford – he made the decision to retain his language,” VanEvery-Albert recalls of the details he passed along from the experience. “He worked in the fields for long hours alone, so he had conversations with himself in Mohawk, he sang every Mohawk song he knew; he decided, in spite of what was happening to him, that he was going to keep this aspect of himself.”

Orange Shirt Day is recognized in Grand Erie and across Canada as a way to educate and raise awareness of the residential school system – there were 130 residential schools across Canada – and the continuing impact it has. It honours survivors and the many young people who didn’t come home, while pointing to the responsibilities we all have in the process of healing and reconciliation.

VanEvery-Albert credits the resilience of her mother and her grandfather and other family members with her own strength and perseverance, which she’s dedicated towards her career in education. More than three decades ago, she was one of those responsible for starting a Mohawk and Cayuga immersion school in Six Nations of the Grand River. She and others started a program that trained other fluent speakers of Cayuga and Mohawk to teach. Later, when the number of fluent speakers who were willing to teach began to dwindle, some members of the community began Mohawk and Cayuga immersion programs for adults. This produced a number of speakers, some of whom took teacher training and began classroom teaching.

“You can’t understand a culture until you have a grasp of the language,” she says. “The two live within each other.”

Orange Shirt Day grew out of the St. Joseph Mission Residential School commemoration event in British Columbia in 2013. It is the legacy of Phyllis (Jack) Webstad’s story of having a new orange shirt taken from her on the first day of school at the Mission, and never returned. The day has become an opportunity to spark a discussion on all aspects of residential schools, bringing Indigenous leaders, local governments, schools, and communities together in the spirit of reconciliation.

“Generations of children were taken from their communities, and lost relationships with family and peers in a system designed to erase our languages, our histories and our identities,” said VanEvery-Albert. “It’s difficult to get beyond a trauma like that, but talking is one way to start.”

The Mohawk Institute Indian Residential School, which sits less than two kilometres from Grand Erie’s Education Centre, closed in 1970 after decades of operation.

To ensure Success for Every Student, we will​​​​​​: